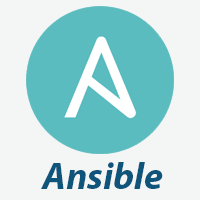 Ansible is an open-source IT engine which automates the IT tools such as intra service orchestration, application deployment, cloud provisioning, etc.

In this tutorial, we are going to discuss the following topics:

Ansible is an open-source IT engine that automates application deployment, cloud provisioning, intra service orchestration, and other IT tools.

It can easily connect to clients using SSH-Keys, simplifying though the whole process. Client details, such as hostnames or IP addresses and SSH ports, are stored in the files, which are called inventory files. If you created an inventory file and populated it, then Ansible can use it.

Ansible uses the playbook to describe automation jobs, and playbook, which uses simple language, i.e., YAML. YAML is a human-readable data serialization language & commonly used for configuration files, but it can be used in many applications where data is being stored.

A significant advantage is that even the IT infrastructure support guys can read and understand the playbook and debug if needed.

Ansible is designed for multi-tier deployment. Ansible does not manage one system at a time, and it models IT infrastructure by describing all of your systems are interrelated. Ansible is entirely agentless, which means Ansible works by connecting your nodes through SSH (by default). Ansible gives the option to you if you want another method for the connection like Kerberos.

Ansible pushes small programs after connecting to your nodes which are known as "Ansible Modules". Ansible runs that module on your nodes and removes them when finished. Ansible manages the inventory in simple text files (These are the host's files). Ansible uses the host file where one can group the hosts and can control the actions on a specific group in the playbooks.

Here are some important reasons for using Ansible, such as:

Here are some essential points from the history of Ansible, such as:

Ansible works by connecting to your nodes and pushing out a small program called Ansible modules to them. Then Ansible executed these modules and removed them after finished. The library of modules can reside on any machine, and there are no daemons, servers, or databases required. 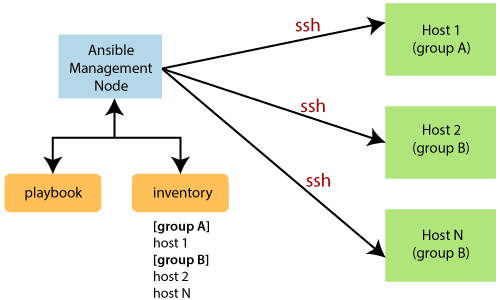 In the above image, the Management Node is the controlling node that controls the entire execution of the playbook. The inventory file provides the list of hosts where the Ansible modules need to be run. The Management Node makes an SSH connection and executes the small modules on the host's machine and install the software.

Ansible removes the modules once those are installed so expertly. It connects to the host machine executes the instructions, and if it is successfully installed, then remove that code in which one was copied on the host machine.

Here are some important terms which are used in Ansible, such as:

When you have compared and weighed your options and decided to go for Ansible. Then installed it on your system. Let's go step by step of the installation in different Linux distributions, such as:

Step 1: First perform an update to the packages

Playbooks are the files where the Ansible code is written. Playbooks are written in YAML format. YAML means "Yet Another Markup Language," so there is not much syntax needed. Playbooks are one of the core features of Ansible and tell Ansible what to execute, and it is used in complex scenarios. They offer increased flexibility.

Playbooks contain the steps which the user wants to execute on a particular machine. And playbooks are run sequentially. Playbooks are the building blocks for all the use cases of Ansible.

Ansible playbooks tend to be more configuration language than a programming language.

Through a playbook, you can designate specific roles to some of the hosts and other roles to other hosts. By doing this, you can orchestrate multiple servers in very different scenarios, all in one playbook.

Each playbook is a collection of one or more plays. Playbooks are structured by using Plays. There can be more than one play inside a playbook. 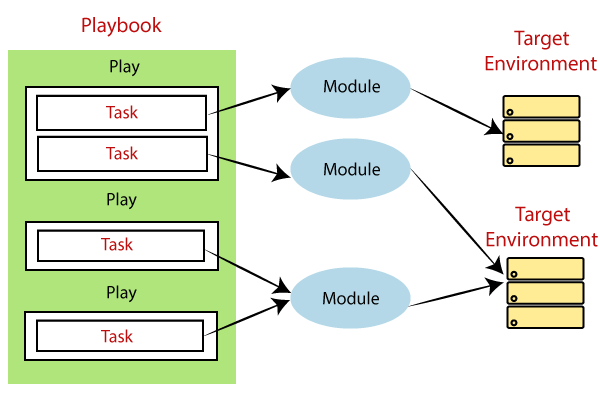 The function of the play is to map a set of instructions which is defined against a particular host.

There are different YAML editors, but prefer to use a simple editor such as notepad++. First, open the notepad++ and copy-paste the below YAML and change the language to YAML (Language → YAML).

Let's start by writing an example YAML file. First, we must define a task. These are the interface to ansible modules for roles and playbooks.

One playbook with one play, containing multiple tasks looks like the below example.

Above is a basic syntax of a playbook. Save it in a file as test.yml. A YAML syntax needs to follow the correct indentation.

Here are some YAML tags are given below, such as:

Ansible Tower is like Ansible at a more enterprise level. It is a web-based solution for managing your organization with an easy user interface that provides a dashboard with all of the state summaries of all the hosts. And allows quick deployments, and monitors all configurations.

The tower allows us to share the SSH credentials without exposing them, logs all the jobs, manage inventories graphically, and syncs them with a wide variety of cloud providers.

Previously, Ansible Tower called the AWX project, is the fix to this problem. Especially those that render better as graphical rather than text-based output, such as real-time node monitoring.

There is the following prerequisite to install the Ansible Tower, such as:

Here are some features of the Ansible Tower, such as: 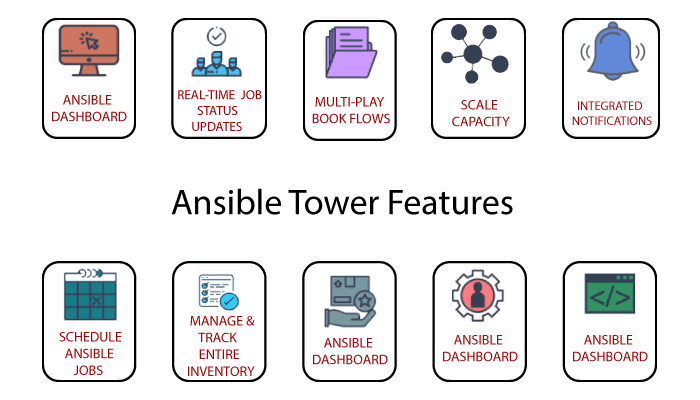 1. Ansible Tower Dashboard: It displays everything which is going on in your Ansible environment, such as the inventory status, the recent job activity, the hosts, and so on.

2. Multi-Playbook Workflows: It allows to chain any numbers of playbooks, any way of the usage of different inventories, runs different users, or utilizes various credentials.

3. Real-Time Job Updates: Ansible can automate the complete infrastructure. Also, you can see real-time job updates such as plays and tasks broken down by each machine either been successful or failure. Therefore you can see the status of your automation and know what's next in the queue.

4. Scale Capacity with Cluster: You can connect multiple Ansible Tower nodes into an Ansible Tower cluster as the clusters add redundancy and capacity, which allows scaling Ansible automation across the enterprise.

5. Self-Service: You can launch playbooks with just a single click through this feature.

6. Remote Command Execution: With this command, you can run simple tasks such as restart any malfunctioning service, add users, reset passwords on any host or group of hosts in the inventory.

8. Integrated Notification: This notifies you when a job succeeds or fails across the entire organization at once, or customize on a pre-job basis.

9. Schedule Ansible Jobs: It schedule different kinds of jobs such as playbook runs, cloud inventory updates, and source control updates to run according to the need.

The role is the primary mechanism for breaking a playbook into multiple files. This simplifies writing complex playbooks and makes them easier to reuse. The breaking of the playbook allows you to break the playbook into reusable components.

Each role is limited to a particular functionality or desired output, with all the necessary steps to provide that result either within the same role itself or in other roles listed as dependencies.

Roles are not playbooks. Roles are small functionality that can be used within the playbooks independently. Roles have no specific setting for which hosts the role will apply.

Top-level playbooks are the bridge holding the hosts from your inventory file to roles that should be applied to those hosts.

The directory structure for roles is essential to creating a new role, such as:

The roles have a structured layout on the file system. You can change the default structured of the roles as well.

For example, let us stick to the default structure of the roles. Each role is a directory tree in itself. So the role name is the directory name within the /roles directory.

In the above example, defined a variable name tomcat_port and assigned the value 8080 to the variable and can use it in your playbook wherever required.

The below code is from one of the roles (install-tomcat), such as:

Ansible modules are discrete units of code which can be used from the command line or in a playbook task.

The modules also referred to as task plugins or library plugins in the Ansible.

Ansible ships with several modules that are called module library, which can be executed directly or remote hosts through the playbook.

Users can also write their modules. These modules can control like services, system resources, files, or packages, etc. and handle executing system commands.

Let's see how to execute three different modules from the command line.

Some module takes no arguments, and the shell/command modules take the string of the command which you want to execute.

From playbook, Ansible modules execute in a very similar way, such as:

Here is another way to pass arguments to a module that is using YAML syntax, and it is also called complex args.

Technically, all modules return JSON format data, though command line or playbooks, you don't need to know much about that. If you're writing your module, it means you do not have to write modules in any particular language which you get to choose.

Modules should be idempotent and avoid making any changes if they detect that the current state matches the desired final state. When using Ansible playbooks, these modules can trigger "change events" in the form of notifying "handlers" to run additional tasks.

Documentation for each module can be accessed from the command line with the Ansible-doc tool:

If you have a large playbook, it becomes useful to be able to run only a specific part of it rather than running everything in the playbook. Ansible supports a tag attribute for this reason.

When you apply tags on things, then you can control whether they are executed by adding command-line options.

When you execute a playbook, you can filter tasks based on the tags in two ways, such as:

In Ansible, tags can be applied to many structures, but its simplest use is with individual tasks. Let's see an example that tags two tasks with different tags, such as:

If you want to run the configuration and packages part of a very long playbook, then you can use the -tags option on the command line.

And if you want to run a playbook without certain tagged tasks, then you can use the -skip-tags command-line option.

Ansible Galaxy is a galaxy website where users can share roles and to a command-line tool for installing, creating, and managing roles.

Ansible Galaxy gives greater visibility to one of Ansible's most exciting features, such as application installation or reusable roles for server configuration. Lots of people share roles in the Ansible Galaxy.

Ansible roles consist of many playbooks, which is a way to group multiple tasks into one container to do the automation in a very effective manner with clean, directory structures.

Here are some helpful Ansible Galaxy commands, such as:

Here are some commands which are used in Ansible, such as:

To learn Ansible, you have hands-on experience with running commands into a Linux shell. This will help you the Ansible tasks in a better way.

Our Ansible tutorial is designed to help beginners and professionals.

We assure that you will not find any problem in this Ansible tutorial. But if there is any mistake or error, please post the error in the contact form.