Logical reasoning (verbal reasoning) refers to the ability of a candidate to understand and logically work through concepts and problems expressed in words. It checks the ability to extract and work with the meaning, information, and implications from the bulk of the text. The logics are expressed verbally, and you have to understand the logic before solving the questions.

Logical reasoning (non-verbal reasoning) refers to the ability of a candidate to understand and logically work through concepts and problems expressed in the form of images, diagrams, etc. It checks the ability to extract and work with the meaning, information, and implications from the given images or diagrams. Here, the logics are expressed non-verbally, and you have to understand the logic before solving them.

It is a simple division series in which each number is one-half of the previous number. We can also say that each number is divided by 2 to arrive at the next number;

The series consists of letters in reverse alphabetical order. Therefore, the missing letters are LKJ.

1) I. All the colleges in the city had to keep closed for three days a week.

II. Many students have left the local colleges.

1) Which word does not belong to others?

A kilogram measures weight and the other units are used to measure length.

1) Pointing to a photograph, a man said, "I have no brother, and that man's father is my father's son." Whose photograph was it?

1) Arrange the following words in a meaningful sequence.

Infection occurs first, then one visits a doctor, and after consultation, the doctor starts the treatment which is followed by recovery.

1) Peter is in the East of Tom and Tom is in the North of John. Mike is in the South of John then in which direction of Peter is Mike? 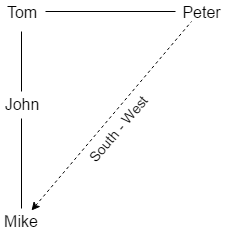 1) Which of the following diagrams correctly represents lions, elephants, and animals? 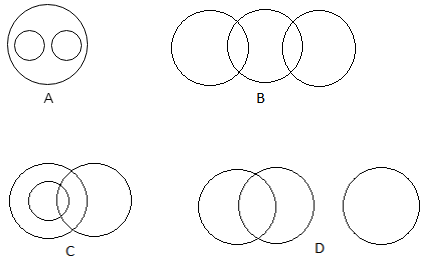 Lions and elephants have no relationship to each other, but both are animals.

10) Verification of the Truth of the Statement

1) An animal always has

An animal will always have a life.

Verification of the Truth of the Statement 1

Verification of the Truth of the Statement 2

Verification of the Truth of the Statement 3

1) What is Geeta's rank in the class?

1) If in a certain language, NOIDA is coded as OPJEB, how is DELHI coded in that language?

Each letter in the word NOIDA is moved one step forward to form the code OPJEB. So, in DELHI, D will be coded as E, E as F, L as M, H as I, I as J. Thus, the code becomes EFMIJ.

Reason (R): It was invented to pump out the water from the flooded mines.

The need of self-working engine to pump out the water from the flooded mines led James Watt to invent the steam engine.

A book cannot exist without pages.

1) If you are a fitness walker, you don't need to go to a health gym. You also don't need any fitness equipment for workout. All you need is a pair of comfortable athletic shoes.

This paragraph supports which of the following statements;

In this paragraph, the author is talking about the convenience of fitness walking. He is saying that fitness walking is a workout that does not need equipment and membership of a health gym.

If the first two statements are true, the third statement is

From the first two statements, it is clear that Mukesh is the youngest of the three. So, the third statement is false.

1) Statement: A severe drought is reported in many states of the country.
Courses of action;

In this situation, the government should think about saving the lives of people and livestock by providing basic amenities like food and water. Providing financial assistance will not provide immediate relief and would put an extra burden on the funds.

1) It is called Restitution when you compensate someone for damaging his or her property in some way. Which of the following situations is the best example of Restitution?

Tom damaged his friend's camera when the camera was in his possession, and he agreed to pay for the repair.

I) All heroes are villains.
II) All villains are zeros.
III) Some heroes are jokers. 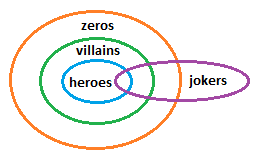 From the given statement and the above diagram, it is clear that option B is the correct answer.

1) Statement: "You are hereby appointed as a software engineer with a probation period of six months and your skills and performance will be reviewed at the end of the probation period for confirmation." - A line written in an appointment letter.

I. The performance of the candidate is not known at the time of appointment.
II. An individual is likely to prove his worth during the probation period.

The performance of a new employee is generally tested over a span of time. So, I is implicit. The statement also says that the individual's worth shall be reviewed during the probation period before confirmation. So, II is also implicit.

1) Which answer figure will continue the same series as established by the problem figures?

In problem figure A, the arcs are towards arrow then in the next step arcs are pointed away from the arrow and so on.

And, in the lower part of the problem figures, the two signs are changing their positions alternately.

Now, the answer figure 2 fulfills all the above conditions, so it will continue the series.

1) Select three figures out of the following five figures which when fitted into each other would form a square.

Figures 1, 2 and 5 will form the square as shown in the following image;

1) Which of the following figures is different from others?

Only in figure D, the symbols on either side of the horizontal line are different. 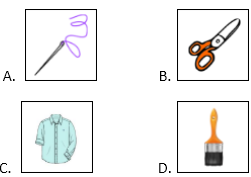 1) Which of the following series of figures follows the given rule?

Rule: The closed figure loses its sides, and the open figure gains its sides as the series proceeds. 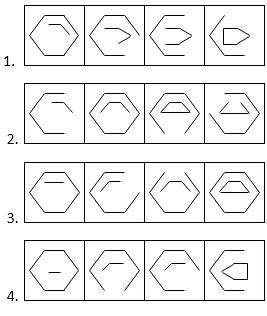